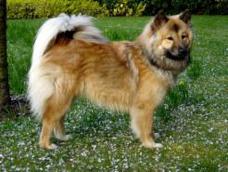 In the 1950’s the Wipfel family started to undertake the creation of an ideal family companion dog. Julius Wipfel, the ‘father of the Eurasier’ had many collaborators and enthusiasts who all worked to help make this dream a reality. In 1960 Wipfel clearly defined his goals in creating this new breed of dog.
The aim was to create a medium size Spitz-type family dog, one that commanded respect but which also had a calm and even-tempered nature. It was to be attractive, with beautiful and varied colour coats. The new breed was to be adaptable and suitable to different family lifestyles, from city life to rural life.

The initial breeding plan was one of mating a select group of German Wolfspitzes with early Chow Chows, which did not have the same appearance as today’s Chows. The new breed was named ‘Wolf-Chow’. Later, in 1972 after some debate amongst the leading Wolf-Chow enthusiasts, Wipfel chose to include the Samoyed. Soon after, the breed was recognised by the German Kennel Club (VDH) and the FCI in 1973 and was renamed the Eurasier.

There are now about 8,000 Eurasiers around the globe, mostly in Europe, and primarily in Germany, the country of origin. Being a fairly new introduction, the UK is only home to a relatively small number.

We are located at:

If you have any queries or wish to get in touch, please contact us:

Get social with us.